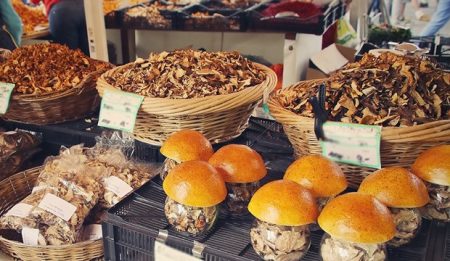 Having secured a rich history in many ancient Asian healing practices, medicinal mushrooms have been prescribed and used for countless ailments for thousands of years.
As modern medicine rediscovers these ancient superfoods, there is good evidence that mushrooms are among the most powerful functional food in a growing cancer-fighting and cancer-preventing arsenal.

It is first important to differentiate between the anti-cancer medicinal mushrooms and the countless other common varieties.
A quick visit to the local supermarket will reveal culinary mushrooms such as oyster, portabella, and others.
Although these have their health benefits, the focus of this article will be on four of the more specialized and not typically commercially grown reishi, maitake, agaricus blazei murill, and turkey tail mushrooms.

There are a few primary mechanisms that most of these functional, anti-cancer mushrooms share when assisting the body during cancer stages or in simple everyday prevention. First is their ability to enhance the body’s first line of defense against cancer – the immune system. When this system is weak or has failed, the mechanism for cancer has a better opportunity to manifest.

Next, some anti-cancer mushrooms exhibit direct antiviral and tumor shrinking abilities. In learning about the assistance given by mushrooms, it is important to note that the side effects exhibited are often mild, but it is still important to talk with your healthcare provider before use.

It has been demonstrated that, in some cases, formulas containing multiple strains of different mushroom extracts often exhibit synergistic, complementary, and amplified effects.
This is in stark contrast to many of the negative cumulative effects of chemotherapy drugs and radiation therapy methods commonly prescribed in hospitals today. As with research for many alternative treatments, the United States has been late to the party when it comes to medical research on the anti-cancer and overall health benefits of mushrooms.

Perhaps one of the most well-known medicinal mushroom in Asian healing arts is Ganoderma lucidum, or better known by its common name, reishi. The mushroom’s bioactive molecules and polysaccharides have been shown to better activate natural killer (NK) cells reducing cancer metastasis. NK cells are lymphocytes that perform immunosurveillance within the body, constantly on the lookout for “immuno-alerters” signaling tumor presence.

Reishi also has been shown to assist in slowing the growth (angiogenesis) of tumors as well as triggering programmed cell death in malignant cells. Currently, there is data to support the potential use of reishi as, at the very least, an adjunct therapy for colorectal cancer, lung cancer, prostate cancer, and breast cancer. 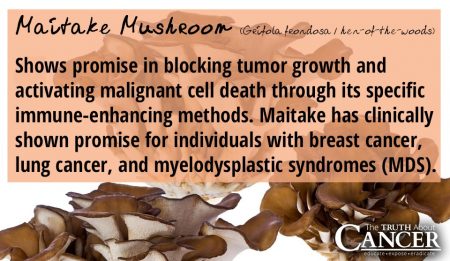 This mushroom made perhaps the biggest splash when a study jointly conducted by the Medical Department of Tokyo University, The National Cancer Center Laboratory, and Tokyo College of Pharmacy showed a complete recovery in 90% of guinea pigs injected with cancer cells (180 sarcoma).

The pattern of other mushrooms was seen again as agaricus blazei murill activated macrophage and interferon immune activity leading to tumor shrinkage, a halt in metastasis, and reduction of future cancer occurrences. As an adjunct, agaricus blazei murill was shown to lessen the side effects in individuals undergoing chemotherapy for endometrial, cervical, and ovarian cancers.

In 1976, a Japanese company patented certain extracts of this mushroom under the name PSK and later PSP.
They have since become recognized cancer drugs in Japan.
The anti-viral properties of the turkey tail mushroom offer a unique opportunity to target oncoviruses (tumor virus) such as human papillomavirus leading to cervical cancer, hepatitis C leading to liver cancers, and others.
For this mushroom, again studies are showing increased NK activity towards tumor detection and eradication.
This mushroom is in the process of a $5.4 million study by the National Institutes of Health that began in late 2012.

It is important to note that drug companies cannot patent mushrooms. Due to this fact, funds typically won’t be allocated to study them unless they come from private institutions or government grants. However, this should be a positive as many studies only seek to isolate one part of a plant or mushroom to patent as a drug.

As mycologist (mushroom expert) Paul Stamets states, “Isolating one constituent from the others denatures and lessens the broad-spectrum potency of this natural, functional food.” 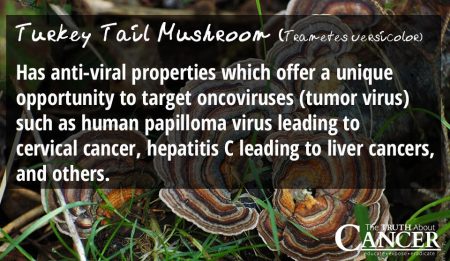 Medicinal Mushroom Supplementation: Choosing the Correct One for You

Mushrooms and mushroom supplements come in many different forms for health and wellness. These functional foods can be raw, powdered, liquid, and infused into other products. Each has their own sets of advantages and disadvantages.